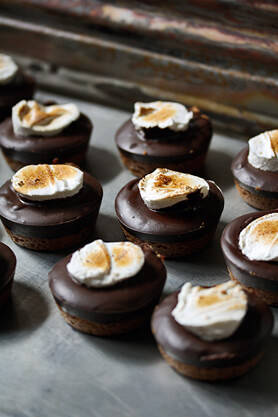 Although likely an oral tradition passed along at campfires for quite some time, the first published version of the “some mores” recipe can be found in a 1927 handbook: Tramping and Trailing with the Girl Scouts. By now everyone knows the formula: crunchy cookie + melty chocolate + gooey marshmallow, charred with a bit of smoke. There’s plenty of variations on that theme... The candybar at Liddabit Sweets got me thinking about a sophisticated indoor version using Arbor Teas. Here, the cookie base is a toasted pecan shortbread laced with black tea, vanilla bean, cardamom, and anise, all care of Arbor Tea’s organic Thai Iced Tea blend. To invoke the requisite bonfire, a soft chocolate ganache layer is infused with their organic, smoked Lapsang Souchong. All is topped with a homemade marshmallow, singed by the flame of a culinary torch.

Working quickly, pour one heaping tablespoon of warm ganache on top of each cooled biscuit while still in muffin cups. Shake the pan from side to side and tap lightly on counter to level the ganache, and then press a marshmallow into the center of each. Allow ganache to set until firm, about 1½ hours. Loosen s’mores from pans with a small offset spatula. Torch the tops of marshmallows with a small culinary torch or under a broiler before serving.

Recipe by Olivia May